The language of oppression

No matter what I do to move on or avoid it or stop thinking about social injustice and equality, something new happens and I’m drawn back to one simple truth – I have a burning passion about concepts of equality relating specifically to men’s rights. Why is this, I hear you ask. Well, it’s because I see an oppression of men occurring in our society today that few people are talking about. I see it in the language being used, which creates social perspectives and policies that favour women at the expense of men, and I see that too many people have their heads in the sand about it, so it inspires me to stand up and say something.

It’s about the language

The language is sexist discrimination


Not only is the language being used sexist and discriminating against men, it also creates a false perception that all victims are women, and all men are abusive criminals.

Imagine if we only discussed male victims of domestic violence, and how more support needs to be given to male victims, and only women are perpetrators of crime and something needs to be done about it!

We’d look at those statements and laugh at how ridiculous and stupid they are, because we know that they’re not true; we know that both men and women are involved. But there’d be women howling on TV about about sexism and discrimination by the patriarchy focusing attention and favouritism with men while excluding women. We’d never hear the end of it.

And in exactly the same way, it’s laughable that attention be focused only on female victims and male perpetrators, and yet no one is laughing. The language being used is demanding it, but no one is saying it’s stupid. Many people who have a problem with this are saying nothing, because they don’t want to be seen as critical of women, women’s groups or women’s concerns.

As a result their silence is allowing men to become a class of people who are seen only as abusive criminal types who should never receive any support for anything, and any concerns they might have will be ignored or ridiculed.

Who are you not allowed to criticise?

To learn who rules over you, simply find out who you’re not allowed to criticize. - Voltaire

If we lived within a dictatorship ruled by an oppressive tyrant, we’d live in fear of the consequences of criticising them. Think about North Korea – no one wants to criticise their tyrannical leader for fear of being executed.

In the western world, it’s not so bad as fearing executions, but there’s still a group we’re not allowed to criticise – do you know who? You don’t have to think too hard. That’s right, it’s women we’re not allowed to criticise. The consequences of criticising women today is that you’re labelled a misogynist for it. It might not kill you, but the consequences still destroy lives.


“Wow. Her political policies are so stupid!” or “Wow. She’s a terrible CEO – her company went bankrupt because of her mismanagement!”


“Oh really? So why do you hate women so much? You must be a misogynist! You better keep quiet, or we’ll start calling you that in the media and ruin your life. Don’t think we won’t.”

It’s a chilling aspect of western society today that any criticism of women is met with cries of misogyny, sexism and discrimination. The implications are clear: don’t criticise any woman, do what she says, and give her what she wants – and if you don’t comply or are critical of any of it, then you obviously hate all women and will be burned for it upon the pyres of social media.

It’s ludicrous to any critically thinking, rational observer, but to most people in society today, they don’t see it and they don’t get it. It’s become the norm to see only the plight of women in the media, while the plight of men is ignored, and if any man tries to include men’s issues in the discussion (because they know that equality means all men and women) then there are claims that doing so means he hates all women because he’s trying to detract attention from them.

(If that’s true, does it also then mean that those who focus their attention on women’s issues actually hate all men?)

It blows my mind that trying to get both men and women included in discussions results in howls of outrage about your apparent hatred of women because you’re not making it solely about them.


When we see mention of women’s rights we think that’s great. Women need all the rights they can get, right? Well, when some people point out that we already have equal rights, and we already have human rights that applies to both men and women, and maybe we should also consider men’s rights in the same context as women want women’s rights considered, there’s more howls of horror.

“But it’s men who have all the human rights, so we need women’s rights to counter the patriarchy!” is the wailing response, as if women in the western world exist today in some kind of bonded servitude to their patriarchal masters and have no rights whatsoever.

It’s a lie. Men don’t have all the rights, and as time passes, their rights are slowly being eroded away by the language being used, and the policies being created, and the social stigma that’s being created about them and being accepted as normal.


I was inspired to write this post due to two things occurring recently. The first thing that occurred was news this week that the ANZ bank intends supporting female employees with less than $50,000 in their superannuation.


ANZ will pay an extra $500 a year to female employees with less than $50,000 in their superannuation kitty in an attempt to close the gender gap in retirement savings…

Not only that, but they’re also offering female customers (only) free superannuation and financial advice:


ANZ is offering customers free financial advice if they have less than $50,000 in superannuation and will pay staff a $500-a-year super top-up –if they’re female.

You might think this is great, and a good initiative to address the gender pay gap. But see, that’s the problem. The only reason there’s a ‘pay gap’ is because many women simply aren’t working as much as the men are, because of their life choices that has them raising families instead of focusing on their career. Accordingly, they have minimal superannuation.

So what’s happening here is men are being discriminated against because they’re men. What about those men who have less than $50,000 in super because they haven’t worked enough because they’ve been home looking after the children? Or their life circumstances haven’t allowed them to get $50,000 in super yet? Too bad, they’re not women so they don’t get the benefits.

A much better solution would be to pay these ‘top ups’ to ALL people who have less than $50,000 in superannuation, and provide free financial advice to ALL people who have less than that. Instead, providing this support only to women is blatant and sexist discrimination. I hope that it’s rejected in court, but knowing the way our society is changing, I fear that it will instead become standardised.

The second thing that occurred was that I participated in a few discussions on a forum talking about the ANZ news, male paedophilia rings, and sexism in society. The essence of these discussions that I got involved in was that women need more money because only men have always been the instigators of crime and violence throughout history, only men engage in child sex abuse, and only men are always the problem in every situation, and if women engage in violence it’s actually because men force them to.

I was shocked at the level of bias and hatred against men – much of it being supported and encouraged by other men – and it was clear that the language people were using and supporting was explicitly about how evil and criminal men are, everywhere, throughout history. For my attempt to change the language and show that women are also perpetrators of violence and that this policy by ANZ was sexist and discriminated against men, my posts were deleted and I was suspended from the forum. (No, I don't engage in abusive language on these forums. What's offensive to them is simply the truth.)

As a result of that, I decided I would use my own forum instead (this blog), where no one can ban me.

The news about ANZ, the forum conversations and my being suspended from it, along with my ongoing, persistent and burning desire to discuss true equality in our society and how we don’t actually have it because men are being left out of the discussion, inspired me to write this post. My words need to be spoken.

As men continue to say nothing in opposition to the growing stigma against men in society, the stigma of being a man becomes the accepted norm, with the result being that men slowly become the oppressed, afraid to criticise women, afraid to speak up about their rights, and afraid to call for equal rights for both men and women for fear of having their lives ruined with cries of ‘misogynist!’ or ‘MRA! Woman hater!’.

Where do you stand?


I expect there’s going to be a few people over time who will comment below with their attempts to shut me up, to do their part to have me quietly sit by while men’s rights are eroded away to nothing at all. I can’t sit by and idly say nothing, because then I become part of the problem.

It burns inside of me that I must write what I see and feel, and share what I see about the oppression that’s here already and which will only get worse if people don’t stand up and do something about it.

Yes, I said people, rather than just men, because there are plenty of women out there who see this happening too, and they don’t agree with it. I call upon women to add their support to this too.

For equality to have a chance at applying to all people, it needs to include both men and women, not just equality for women. Everyone needs to stand up and say something about the wrongs they’re seeing. They need to write about their opposition to the anti-male sexism, or talk about it, or write to their Member of Parliament, or organise protest marches. They need to do something! 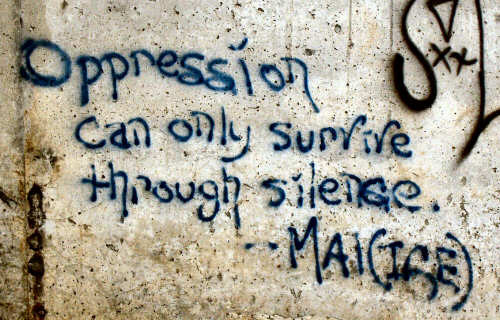 Will you join me to struggle for equality in our society, or will you oppose my desire for equality? That’s what it comes down to. Which side of the fence are you on?