The Emperor has no clothes

There’s a level of insanity in this world that’s becoming more and more prominent, and very few people speak up about it because they don’t want others thinking that they’re against ‘progress’, or that they’re old-fashioned, sexist, racist, discriminatory or just plain insensitive. So they stay quiet, despite the evidence before them that more and more people are going insane.

I was reading an article about a real life superhero, kicking ass for feminism and transgendered everywhere:


Fallon Fox is a bit of a super hero. She kicks ass as a professional mixed martial artist with a 4-1 record and kicks ass outside of it as an outspoken transgender activist and feminist and the first openly trans fighter in MMA.

That’s great, you might be thinking. She’s doing so good as a fighter, kicking butt for feminism. How wonderful!

Except she is a he.

More on his history here: Wikipedia.

Now, don’t you tell me, “But Alan, she’s a woman. And she deserves her victories!”

‘She’ is a man who had his dick chopped off and took some hormone treatments, called himself a ‘woman’, and is now entering Mixed Martial Arts tournaments so he can beat the living shit out of other women.

He was born a man. He has the strength of a man. But just because he chopped his dick off and has boobs from hormone treatment, now he’s a woman? Give me a fucking break.

So this MAN is beating up women and putting them in hospital, and feminists and transgendered are calling ‘her’ a superhero. So that makes it ok for men to beat up women, if they say they’re really a woman. Right.

We also have the story of a married couple – man and woman – deciding together that they weren’t actually man and woman. No, they were really woman and man.

So he became ‘she’, and she became ‘he’. And their children are going to be mighty confused. But there’s thousands of stories like this, with transgendered people realising they’re not actually who they were born as.

Here’s a particularly fascinating story for you…

A woman decided she was a man and started her sex change transition in 2008, but this was interrupted when she became pregnant in 2010.

I guess she wasn’t really convinced she was actually a man if she was having intercourse with another man at the time… Although, maybe she thought she was a gay man or something. But then how to explain the pregnancy?

Anyway, moving on from such complicated questions…. In 2012, she applied to be a breastfeeding coach for La Leche League Canada (LLLC), a breastfeeding support organisation, but was rejected because she identified as a man. Well, sure. That seems reasonable. But this idiot decided that was discrimination.

Not only did she want to be a man, she still wanted to be a woman too, and being rejected as a breastfeeding coach because she was saying she was a man was just not on.

So she got all up in the LGBTQ community (communities?) “and among breastfeeding advocates, who argued LLLC’s rigid guidelines were patently discriminatory and failed to reflect a shifting understanding of what defines motherhood in the 21st century.”

The result? Transgender man CAN be a breastfeeding coach:


Last month, after more than a year of internal review, La Leche League International quietly expunged the gendered language from its leadership requirements and now acknowledges that men can, in fact, breastfeed. The Canadian branch has followed suit.

“It was thought that only women could breastfeed. Once it became clear it wasn’t as straightforward as that, the policy had to change,” said Diana West, a spokesperson for the international body, which had never encountered a case like MacDonald’s in its 58-year history.

“We’re just trying to be on the right side of history. Yes, we took a year to do it, but we did it in a way that was fair and unequivocal.”

You stupid morons. No – men can not breastfeed! Just because this fucking idiot of a woman decides to call herself a man does not make her a man!

“We didn’t realise men could breastfeed too. Now we know better.”

Words fail me….  Actually, that’s not true. If they failed me, I wouldn’t be writing this blog post.

Not only is this insanity becoming institutionalised, it’s actually all about the Emperor’s New Clothes. Hans Christian Anderson tried warning us about this. If you don’t know the story, the plot is as follows:


A vain Emperor who cares about nothing except wearing and displaying clothes hires two swindlers who promise him the finest, best suit of clothes from a fabric invisible to anyone who is unfit for his position or “hopelessly stupid”. The Emperor’s ministers cannot see the clothing themselves, but pretend that they can for fear of appearing unfit for their positions and the Emperor does the same. Finally the swindlers report that the suit is finished, they mime dressing him and the Emperor marches in procession before his subjects. The townsfolk play along with the pretense, not wanting to appear unfit for their positions or stupid. Then a child in the crowd, too young to understand the desirability of keeping up the pretense, blurts out that the Emperor is wearing nothing at all and the cry is taken up by others. The Emperor cringes, suspecting the assertion is true, but continues the procession. 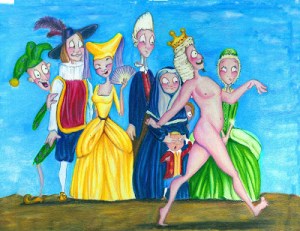 All of those who support this stupidity are just like those townsfolk that don’t want to be thought of as stupid or unfit for their positions, and so they're all following the touted line from feminist swindlers that men can be women and women can be men, and that a person’s physical form does not define who they really are, and that gender shouldn’t be a defining factor in a person’s growth.

It’s all bullshit, but none of them want to be thought of as politically incorrect or insensitive to transgendered people everywhere.

I honestly think some people are confused, and it’s our feminist-influenced society that is creating this confusion, pressuring some men and women to doubt their true nature. It used to be that people would receive counselling for their confusions – if such confusions occurred at all. This transgender stuff is a result of feminism saying “You don’t have to be the gender you were born as. It’s ok – and encouraged – to be the opposite gender if you want to be. Don’t listen to anyone tell you otherwise.” And so we get people who are already mentally confused, thinking that maybe their problems will be resolved if they change their gender.

Suicides are really high amongst transgendered. Feminists say it’s because of a lack of acceptance from others of their desire to be something different to what they were born as, and so persecution and prejudice makes these people commit suicide. Part of that may be true, but another part may be that they’re already mentally disturbed which leads to high suicide in the first place.

It’s real simple. If you have a penis, you’re a man, and if you have a vagina, you’re a woman. If you think you’re the opposite of what you are, then you need help with your mental disorder. I recommend counseling.

And if you support treating these confused and mentally ill people as if its perfectly normal to be so confused, then you probably deserve treatment for your own insecurity that makes you strongly need to conform to what everyone else is saying.

“Hey, his umm…. his clothes are spectactular!”

I’m the little kid looking around at you all and saying, “What the fuck is wrong with all you people?”